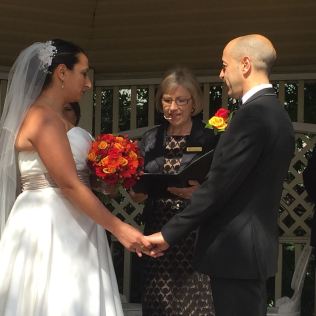 It was a slow beginning to the relationship between Bruna and Alby it took months of text messages and the odd chance encounter on the train before Alby decided to give his mobile number to Bruna.  Then one night in October at a soccer presentation night, Alby discovered the feeling of butterflies in his belly when Bruna went over to say hello. A quick good bye was exchanged at the end of the night with the hope that more would come. Around comes November and Alby invites himself to watch Bruna play indoor soccer; he felt like a young teenage boy full of excitement to see this girl. Finally Alby got the courage to ask Bruna out and they went on a first date on the 26th of November.

On this date there was no shortage of conversation, both were fighting to get their say, Bruna winning that battle of course. It was a great night; both enjoying each other’s company.

A second date followed on the Saturday where they decided a movie would be nice… which ended up with poor Alby discovered that bringing Bruna to an action movie wasn’t such a great idea. As it so happens Bruna is very jumpy during the action bits and has such a thing that with every jump she flings her arms in fright…well let’s just say that Alby went home that night with some nice bruising on his arm.

From then on Alby and Bruna were inseparable, with a deep understanding of each to the point where they would finish off their sentences or would answer each other’s questions before it was even asked. It is like they have known each other for years.

Now fast forward ……… nestled in a cute little restaurant under the Spanish steps in Rome, Alby asks Bruna to marry him and with a little delay she said yes…

I asked Bruna and Alby to finish this sentence – if love is… then marriage is?

The following are a few lines from the beautiful vows Bruna and Alby wrote themselves:

…….It amazes me how I feel so at ease and comfortable with you.  Never before have I opened up my most inner thoughts and desires to anyone as I have to you. I have always had this inner me but not willing to share it with anyone before. ……….

Bruna, my Bella, I promise you today to give you all my love now and forever, as your husband till the day my eyes close for the last time.

………I love you for the way you make my heart beat a few extra beats when you hold me tight and for how you look into my eyes and allow all my worries to just fade away and you let me just simply breathe………..I love you for how you love my son like his yours and for how you are willing to make us your family.  I love you for being you…a warm gentle soul, that has lots of time for others, that has compassion, courage, strength, intelligence, wits and a great passion for life…………..

Vows to include Bruna’s son Wayde)

Marriage is also an affirmation of the family union which includes Wayde and the responsibilities, joys, sharing, love and strength that this family holds for them.  Alby and Bruna know that by loving one another they will give Wayde the greatest gift of all, that of giving and receiving love.  Their shared love and friendship will bring great joy to themselves and to all those who know them.

Alby: Today as I become your husband, we will also become a family.  I promise to be faithful to you and I will be there for you and Wayde always.  No matter what circumstances life brings our way, we will face them together as a family.  I commit myself to both of you from this day forward and forevermore…… 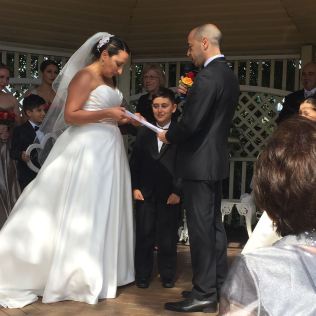 If you would like to hire me as a celebrant you can email tocelebrations@bigpond.com or visit my website for further information.  www.annarichards.com.au